A Tale Of Two Journeys: Experiencing The Great Loop On A Fleming 65

Twenty-two years ago, my wife Bain and I found ourselves having lunch at a place on Tilghman Island, overlooking the Chesapeake Bay. We discussed if it was possible to circumnavigate the Eastern United States using the Great Lakes and attached waterways. After a little research we discovered that there was indeed such a route, which at the time was called the Great Circle. Now known as the Great Loop, the general route from the Chesapeake begins by traveling up the East Coast to New York City, up the Hudson River to the Erie Canal and the Great Lakes, then down the Mississippi River to the Gulf of Mexico, and finally around Florida and back up to the beginning. This discovery led our family on a search to find a suitable boat for the five of us and our pets. At the time we owned a 35-foot Duffy down-east cruiser that would probably work for two, albeit in a camping life style. But the Duffy was wholly inadequate for two adults, two college students, a fifteen-year old, and two dogs.

As luck would have it, while in a doctor’s office we noticed a small ad in a magazine for a handsome, salty looking boat called a Fleming. It was not a brand with which I was familiar, but alertly noticed that the dealer was local to the DC-Baltimore area, we proceeded to contact Burr Yacht Sales in Edgewater, Maryland. After being disabused of our interest in other boats by Ray Currey, we became the fourth owners of Fleming 53-017. While that sounds pretty straight-forward, the entire process took about a year, several boat shows and much hand-wringing to accomplish. In truth, the Fleming had us at “Hello”. It provided three staterooms, two heads, pet safety on-deck, and several capacious levels that would allow the five of us to live in close proximity 24-7 for 9 months.

We now owned a Fleming 53 that was 20 feet longer and infinitely more complex than anything we had previously operated. We had a general game plan of the Great Loop voyage which was several orders of magnitude greater than anything we had ever done before. We had a small construction business that needed to continue to operate in our absence, a 15-year-old who needed to complete the 9th grade during our trip, and a year to get organized. What transpired was one of the most ambitious and memorable family trips we have undertaken, made possible by the Great Loop’s rich history and inspiring locales. 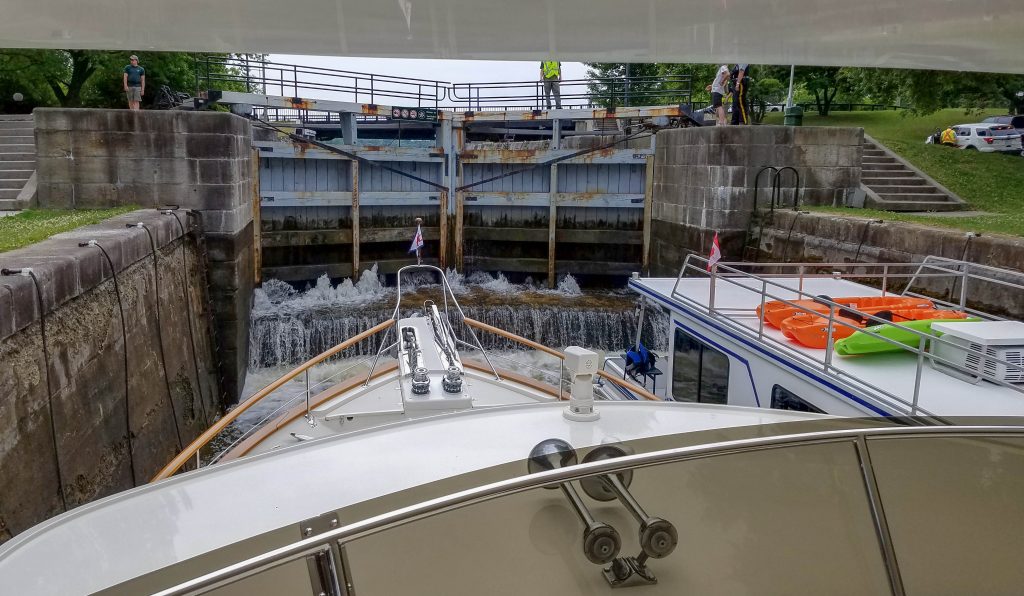 The canals, lakes, and rivers we were traveling were the original highways of the United States and Canada. Conflicts that shaped this continent such as the French and Indian War, the American Revolution, the War of 1812, and the Civil War were fought along these waterways. One of the canal systems in Canada that we traveled (the Rideau, between Ontario and Kingston) was built specifically so that Canada and England could supply their interior if the Americans blockaded the St. Lawrence River during the War of 1812. The Americans never blocked the river and the canal’s primary use has since been recreational. The resulting Rideau canal remains a work of art today, with lock walls made of hand shaped stones and hand operated lock gates. Both the Rideau Canal and the Trent-Severn Waterway are now operated by Parks Canada and are named as National Historic Sites.

Two decades and two Flemings (55-123 and 65-023) later, we decided to experience the Great Loop again. Things are decidedly different this time, including a new set of challenges. The Fleming was still named ASLAN, but it was now a Fleming 65 with an 18’8” beam to squeeze through tight canals and an air draft of 24’ to duck under low-clearance bridges. We had lots of new bells and whistles but did not have three teenagers to help and we were now in our mid-70’s instead of mid-50’s. Despite the challenges to overcome, it still seemed like a cool adventure to revisit and a lot of the original ideas and plans from the first trip were still operable.

At the time this is written, we have completed about half of our second Great Loop trip and have started to make the inevitable comparisons between the two. While much is similar, the larger boat did present some challenges that a 53 or 55 would not have to deal with. For example, Fleming 53-017 had an air draft of approximately 18 feet, including the satellite antennas. That means we did not need to make any modifications to meet the height restrictions of the canals, except we took the Oswego Canal in New York to Lake Ontario instead of going all the way to Buffalo on the Erie Canal. Twenty feet is the base line bridge clearance on all the Canadian canals as well as that of the Erie and Oswego Canals. South of Chicago, the Atchison Topeka and Santa Fe Railroad Bridge on the Chicago Sanitary & Ship Canal has a clearance of 19’ 8”, the controlling height for the trip. Hull 65-023, as configured by us, had a bit of a height issue. Nominally the air draft with antennas down is 24 feet. We knew that would not allow us to traverse any of the scenic canals we wanted to cruise and would stop us in Chicago even if we went offshore around Nova Scotia into the St. Lawrence and Great Lakes. Our friends at Burr Yacht Sales (seemingly always) had a solution that did not require major surgery on our hardtop. Our satellite mast was made with a hinge, so with the aid of a large inflatable fender for support, we were able to lower and raise it with ease and reduce our air draft below the 19’ 8” bridge clearance. 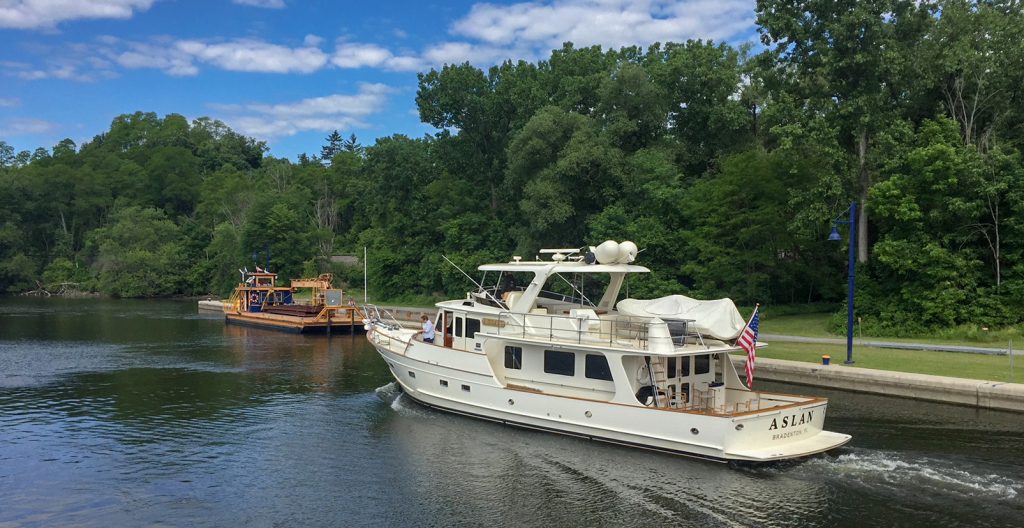 The staff that worked the locks in Canada told us that our Fleming 65 was the largest private boat to travel the canals so far this year. To no surprise, we were advised by several Canadians not to try the Rideau Canal, but we handled it easily. The controlling depth for the two Canadian canals is 5 feet, the draft of all Flemings. The full keel of the Fleming is appreciated here because we did bump the bottom a few times but with no damage. We occupied most of each lock on the Rideau because of our size but that was not a hinderance to our travel. “Locking through” could take up an entire article in itself, however the truth is almost any couple can do it. A third person makes it easier since a hand is needed at both bow and stern. But a spry captain can set the boat against the lock wall and quickly move to the cockpit to handle the stern line. I should note that the cockpit controls are particularly useful to move the stern back to the wall when you miss the arresting cable.

As always, marina space needs to be planned in advance when travelling the Great Loop. We found that space was usually available on the approach walls to the locks but 50A power availability can be iffy, even in marinas. Our Fleming was well equipped to handle these small inconveniences with its generators and water maker – a nice accessory to have for some of the more remote areas we’ve traveled. One such area along the Great Loop that happens to be special for us is Snug Harbor. This small cove can be found on Badgeley Point west of Killarney, Ontario on the North Channel of Lake Huron. During our first Great Loop trip 20 years ago, we spent the night at Snug Harbor on our 30th wedding anniversary and revisited the spot for our 50th anniversary. Another spot not to be missed is the Bad River Channel of the French River on Georgian Bay. Shooting the Liley Chutes rapids with your tender is a real hoot.

Of particular pleasure were the non-stop hand waves, compliments, and “thumbs-up” we received regarding our Fleming from the vacationers, locals, and other boaters at the locks. We discovered there are few ocean-ready Flemings on the Great Lakes, so we were treated almost as royalty at all of our stops and anchorages. Our Fleming 65 turns a lot of heads and despite its size, is very much a Great Loop worthy boat. With the help of both Burr Yacht Sales and Fleming Yachts, we were able to make this revival journey as memorable and seamless as the first. The Great Loop is an adventure that every Fleming owner should try to experience at least once, maybe even twice! 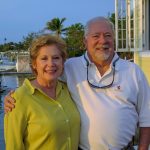 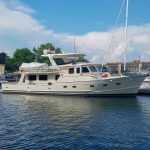 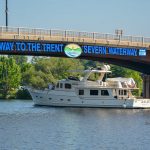 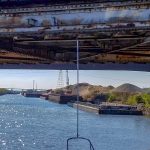 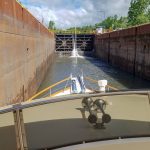 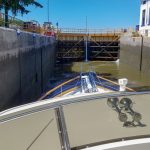 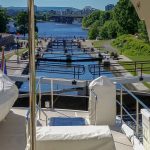 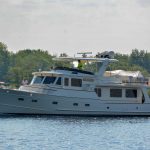 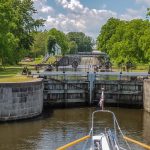 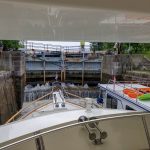 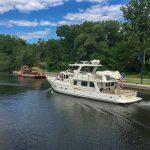 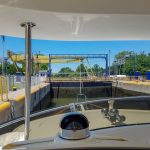 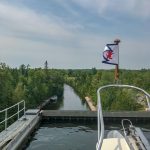 Ray, AJ, Craig, Denise, & Hannah, We want to take a minute to thank you all for making our stay enjoyable. What you’ve created here in south Florida is nothing short of amazing. Your facility is beautiful, but it’s the culture you have created that’s the magic ingredient. You and your team have made us […] 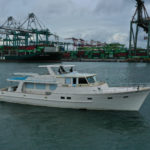 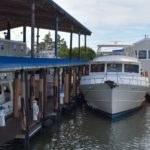 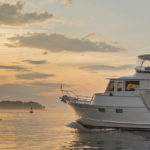 A Retrospect On BYS Outfitted 78 Flemings